Lawrence Charlesworth took the ‘Philosophical Britain‘ module at Queen Mary in 2015. In this post he writes about ‘Agnosticism’ as a philosophical keyword.

We are quite familiar in twenty first century Britain with talk of the existence or non-existence of God. It is no surprise to us if, while browsing the Guardian website, we find an article describing Stephen Fry’s thoughts on God: “utterly evil, capricious and monstrous” – as though He were a dictator criticised for human rights abuses. You can watch the interview, first broadcast on Irish television, here:

Nor are we surprised to hear religious leaders talk about the subject – see, for example, Pope Francis’ thoughts on atheism: “God’s mercy has no limits if you go to him with a sincere and contrite heart. The issue for those who do not believe in God is to obey their conscience.” The headline proclaims: “You don’t have to believe in God to go to heaven” – a comforting thought for atheists everywhere.

Statistics on religious belief, too, reveal a pervading sense of uncertainty. According to the 2011 Census, a quarter of the population have ‘no religion’, and 7% did not answer the (voluntary) question.[i] However, the British Humanist Association has criticised the Census for using a leading question: “What is your religion?” They conducted their own survey in 2011 in order to prove the disingenuousness of the official results. They first asked people, “What is your religion?” and received similar results to the Census. They then asked the same people, “Are you religious?”, but this time around two thirds answered no and only one third answered yes. Furthermore, of those who said they were Christian, only 48% “said they believed that Jesus Christ was a real person who died and came back to life and was the son of God.”[ii] (Although their scruples with leading questions apparently don’t extend to their own website. You can take their quiz, ‘how humanist are you’, found on their homepage – but don’t be too surprised if you discover that you are, in fact, a humanist.)

Richard Dawkins is probably the most famous proponent of atheism today. His view of agnosticism is that it is a bit wishy-washy – at least religious believers have the courage of their convictions. His argument against agnosticism, in ‘The Poverty of Agnosticism’ – a chapter in ‘The God Delusion’ (2006) – is that if we don’t know for sure that God doesn’t exist, it is highly improbable; furthermore, he thinks, one day science will prove God’s inexistence.[iii] However, even he, the public face of atheism, doesn’t quite know what he is: in a debate with Rowan Williams, he said that he “preferred to call himself an agnostic”.

Clearly, modern Britain is uncertain about its religious beliefs. Yet, despite this, we do not often hear the word ‘agnostic’ used. The word itself was first coined in 1869, by Thomas Henry Huxley – a biologist, nicknamed ‘Darwin’s Bulldog’, for his defence of Darwin’s theories against his, often religious, opponents. He posited himself as ‘agnostic’, in contradistinction to ‘gnosis’ – the Greek for knowledge. However, although Huxley coined the word himself, the first modern agnostic might be said to be Auguste Comte (1798-1857). Comte was a French philosopher, and was especially influential in the development of sociology and positivism. It was from his positivism that he has been thought of as the first agnostic. Positivism, influential in the late nineteenth and early twentieth century, is a philosophical doctrine that elevates the scientific method as the only arbiter of truth. Knowledge consists of those things which are empirically verifiable – that is, things which can be proved or disproven through the senses (understanding tools such as microscopes or MRI machines as simply extensions of the senses). This means that anything which cannot be proven or disproven in such a manner does not even have the merit of being considered ‘true’ or ‘false’. It is beyond the limits of our knowledge, and to consider the truth or falseness of such things is essentially meaningless. This is an attack on metaphysics – on everything beyond the immediate physical world. God, by definition, is not a part of the physical world, and so, according the positivist world view, is thrown on the rubbish heap of ‘meaningless concepts’. 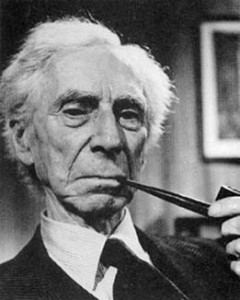 In this light, to be an agnostic is not so much a middle position, directly between theism and atheism, belief and un-belief, but rather a clarification of un-belief. Bertrand Russell (1872-1970), a towering figure of twentieth-century British philosophy, and the quintessential analytic philosopher, himself expressed such a view. In ‘Am I an Atheist or an Agnostic?’ (1947), he says that he would describe himself as an agnostic to a “purely philosophic audience”, but to an “ordinary man in the street” he would call himself an atheist. This reduces agnosticism to a sort of philosophical specificity. Indeed, he goes on to say that, strictly speaking, he is also agnostic about the existence of the gods of Ancient Greece. This position might be characterised as an ‘agnostic atheism’: ‘One cannot really know whether God exists or not; but I don’t believe he does.’ Russell goes on to speak of the virtues of agnosticism. Although some things are more probable than others, and there exist degrees of certainty, it is often felicitous to remind ourselves that there are no such things as certainties. He finishes the piece warning of the dangers of dogma and persecution – here he must have had in mind both the religious persecutions of the past and the (atheistic) intolerance of the Soviet Union in his own day. For Russell then, agnosticism represents the ideals of tolerance and liberalism – it functions as a kind of ‘memento mori’.[iv] He is not alone in giving agnosticism a broader context. The word, after all, means simply ‘a lack of knowledge’, and so others have used the word in its literal sense, for example, in clarifying their position on an unconfirmed scientific theory.

Agnosticism is not only used by un-believers, however. In the modern world there has been an increasing sense of conflict between religion and science. This is even more obvious to us today. In twenty first-century Britain, no-one can escape the vociferous tirades of the New Atheists. However, it would be a mistake to understand the natures of religion and science as fundamentally in conflict. Agnosticism might then be taken up as a position, for un-believers, to distance themselves from the aggressive un-belief of Dawkins and co., and for believers, to intimate their belief in the compatibility of God and a scientific universe. In 1997, the scientist and self-described ‘Jewish agnostic’ Stephen Jay Gould wrote the essay ‘Non-Overlapping Magisteria’. His view is best summarised in his own words: “The net of science covers the empirical universe: what is it made of (fact) and why does it work this way (theory). The net of religion extends over questions of moral meaning and value. These two magisteria do not overlap, nor do they encompass all inquiry (consider, for starters, the magisterium of art and the meaning of beauty).”[v] In writing his essay, he was inspired by Pope Pius XII’s papal encyclical, ‘Humani Generis’ (1950) and Pope John Paul II’s address to the Pontifical Academy of Sciences, ‘Truth Cannot Contradict Truth’ (1996). Both are concerned with evolution, and both, claims Gould, support his idea that religion and science are two separate areas of learning.

On the other side of the fence, many theologians of the twentieth-century have philosophised in support of a rapprochement between science and religion. This should come as no surprise: considering the successes of the scientific method in recent centuries, it is religion that has the most to lose by any supposed conflict between the two. One such theologian is Paul Tillich (1886-1965), considered one of the most influential of the twentieth century. As Gould did, Tillich definitely delineates between science and religion. Fundamental to his theology is the notion that before creating any theology, we must first understand the contemporary situation in which we live.  For twentieth-century theologians, this means understanding the empirical character of reason in the modern world. For Christianity to succeed in this situation, it must undergo a process of ‘demythologisation’ – the purpose of this being to prevent the language of Christianity being confused with the language of science. Scientific knowledge is of a fundamentally different type to knowledge of God. One can possess knowledge of the world. One cannot possess knowledge of God; knowledge of God possesses you.

Although Paul Tillich was not an agnostic, we can understand him in such a way. Whether God does or does not exist cannot be known – certainly it cannot be known in the same way things about the physical universe can be known. We might understand something of God, through revelatory experiences, but we do not know anything of him. For Tillich, to talk about God in the same way we talk about the universe, even to talk of God as a ‘first cause’, is to understand God as finite – it is idolatry. Tillich was an agnostic in the same sense Bertrand Russell was – understanding knowledge as limited by the bounds of the physical universe, neither had any knowledge of God.

If Tillich didn’t call himself an agnostic, many Christians since have done. One has only to type the two words together into Google to see the proliferation of blogs, books, and articles written on the subject. Clearly, agnosticism is a term which resonates with many Christians today. For a recent example of this, see this interview with Ian Hislop: “‘Is it an intellectual belief?’ ‘Someone once said, you’re a classic C-of-E agnostic. I’m not sure what I believe, but it’s definitely C-of-E.’“[vi] Or, from his chapter in ‘Why I am Still an Anglican’ (2007): “I’ve tried atheism and I can’t stick at it: I keep having doubts. That probably sums up my position.”[vii] If there is such a thing as an ‘English spirit’, it is much more akin to the mild-mannered, reasonable Anglicanism of, say, Rowan Williams, Giles Fraser, or Ian Hislop, than the rude, intolerant atheism of Richard Dawkins. After all, in the 2011 Census, around 60% of people did affirm themselves as Christian. I mentioned earlier in this post a quiz on the British Humanist Association’s website, which tries to show that any reasonably minded Briton is actually a humanist. Well, I will hazard the suggestion that we are a nation of agnostics – we just don’t know that we are.

[vii] Ian Hislop, ‘Why I Am Still an Anglican: Essays and Conversations’, Edited by Caroline Chartres, A&C Black, 2007, p.99