In this post, Alfie Turner, who took the ‘Philosophical Britain‘ module at Queen Mary in 2015, writes about ‘Orwellian’ as a philosophical keyword.

Aged 17, I got my first paid job washing-up in my local village pub. Describing working conditions on the phone to my aunt – the anti-Semitic chef and the cohort of Slovenian dogsbodies, jumping to every foul-mouthed order, – my aunt remarked, “it sounds Orwellian!”  Later that year she gave me ‘Down and Out in Paris and London’. Being, I suspect, the only student in England to have escaped school without having ‘Animal Farm’ or ‘1984’ surreptitiously shoved down my throat, my engagement with the phrase “Orwellian” was both literary and practical. Feeling as I did, I equated it with Humanism, the human spirit of the Parisian plongeur, the Wigan miners, and the Communist and Fascist soldiers shouting insults at each other about buttered toast over the frontline trenches in the Spanish Civil War.

The shouting of propaganda t 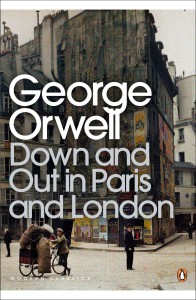 undermine the enemy morale had been developed into a regular technique…

Generally they shouted a set-piece, full of revolutionary sentiments which explained to the Fascist soldiers that they were merely the hirelings of international capitalism…

Sometimes, instead of shouting revolutionary slogans he simply told the Fascists how much better we were fed than they were…’Buttered toast!’–you could hear his voice echoing across the lonely valley–‘We’re just sitting down to buttered toast over here! Lovely slices of buttered toast!…It even made my mouth water, though I knew he was lying.[1]

Orwell cuts through the mirage of claim and counter-claim, using humour in the midst of war, men of one side indistinguishable from the other, finding dignity in man’s common humanity. It brought home what Orwell once said about his art –‘good prose is like a windowpane’[2]. This humanist interpretation of Orwell is in alignment with his prior appreciation of the late-Victorian humanism of James Joyce in ‘Inside the Whale’ and the ever-present influence of Aldous Huxley.

Alas, “Orwellian”, the adjective he has left us, is more complex in its usage and meanings. According to the New York Times, “Orwellian” is ‘more common than ”Kafkaesque,” ”Hemingwayesque” and ”Dickensian” put together. It even noses out the rival political reproach ”Machiavellian”, which had a 500-year head start’[3]. “Orwellian” is used because of a hegemonic Anglo-American adoration of Orwell endorsed in every school this side of Siberia. Orwell’s prophetic verdicts on Imperialism, Totalitarianism and Communism render him a genius, “Orwellian” is used less to evoke what Orwell said than for the recognisable man who said it. His readers are often labelled “Orwellians”; if we are to believe YouGov’s profile, a cohort of young middle class, right of centre males, working in the law and media, most likely to own a cat.[4]

Putting this aside, the way the word has been used is somewhat more complex. To be an “Orwellian” writer is certainly a good thing, the Orwell Prize a coveted award for writers. As Polish intellectual Czeslaw Milosz said of Orwell, whose books he illegally smuggled into Poland, ‘Even those who know Orwell only by hearsay are amazed that a writer who never lived in Russia should have so keen a perception into its life’.[5] This ability to cut through the fog, to take on totalitarianism from outside a communist state, is at the heart of the term’s positive usage. Polemicist Christopher Hitchens wrote that ‘we commonly use the term ‘Orwellian’ in one of two ways. To describe a state of affairs as ‘Orwellian’ implies crushing tyranny, fear and conformism. To describe a piece of writing as ‘Orwellian’ is to recognize that human resistance to these terrors is unquenchable’[6]. To many “Orwellian” is about precise and simple language, derived from his novels but also some of his most famous essays. It was Orwell who made this readable style of language so easily applicable to nearly everything in the modern world, not least because he used it to describe the everyday, even precise instructions for brewing tea. 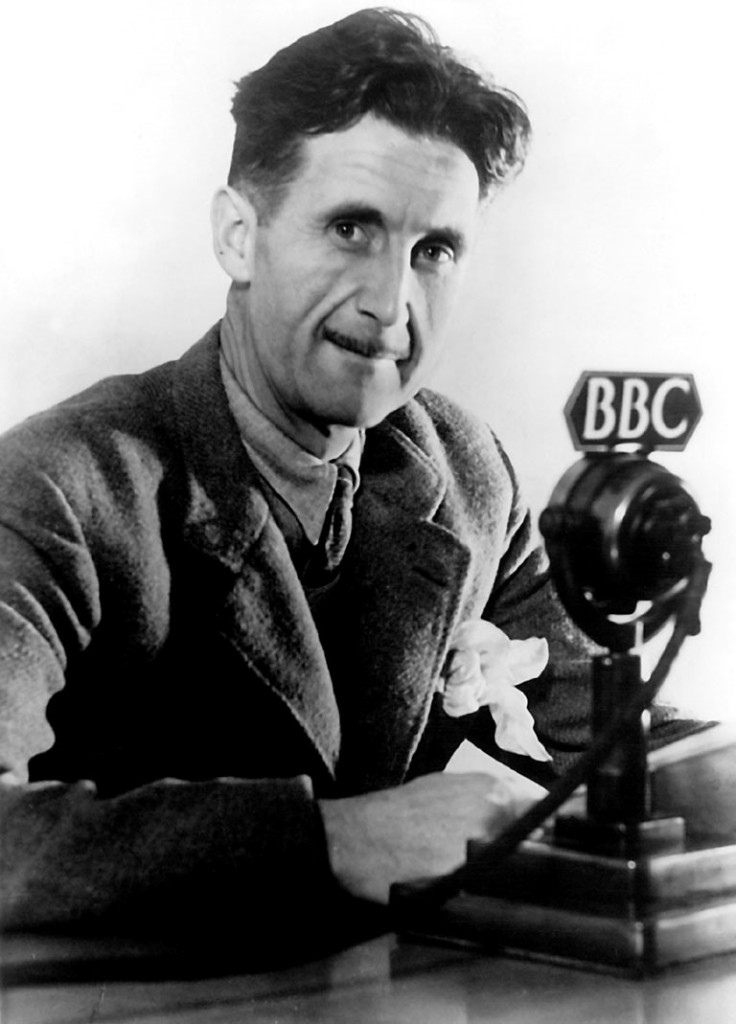 “Orwellian” principle usage is now as a by-word for evil. It is summoned to attack people, organisations and regimes that bear no relation to one another, other than that they are held in contempt by somebody. The Republican Party have brandished the NHS “Orwellian”, Samsung TVs are “Orwellian” and recently Bill Maher said of Isis that “this idea that we cannot even call it Islamic terrorism seems Orwellian to me”. Even Peppa Pig has been called Orwellian, some animals consulting Doctor Brown Bear, whilst others Dr Hamster the Vet, leading many to ask the appropriate Orwellian question; “are some animals more equal than others”?

At a 1995 Tory conference John Major attacked Blair, suggesting ‘Labour has been reading 1984…the brainchild of another public-school-educated Socialist’.[7] In the light of the Iraq war, it is interesting to reflect on Major’s prophetic words. Orwell’s ‘1984’ mantra that “War is Peace, Freedom is Slavery, Ignorance is Power” has echoes in George Bush’s claim that “I just want you to know that, when we talk about war, we’re really talking about peace.”[8] The “Orwellian” nightmare cast by the shadows of ‘Animal Farm’ and ‘1984’ has a clear political saliency that persists today; recent evocations of Orwell regarding WikiLeaks and the NSA revelations are a case in point.

“Orwellian”, born out of Orwell’s thinking, is rooted in 20th century philosophy, but there is a dualism in Orwell’s theoretical ideas and views as a political activist. For example, he had a life-long contempt for intellectuals, calling Sartre ‘a bag of wind and I am going to give him a good boot’[9]. However, he saw politics as ubiquitous, infecting all other aspects of life. Writing to Orwell in 1949, Huxley observed that ‘1984’ ‘hints of a philosophy of the ultimate revolution — the revolution which lies beyond politics and economics, and which aims at total subversion of the individual’s psychology and physiology’[10]. Orwell believed that literature and philosophy were inseparable; ‘no one, now, could devote himself to literature as single-mindedly as Joyce and Henry James’[11]. But it is his activism that marks him apart, unable to watch the 20th century unfold as a passive spectator. Having read Nietzsche’s “master slave relationship”, he reappraised his own position as a colonial officer in Burma, and, as related in ‘Burmese Days’, duly quit to become a full-time writer.

“Orwellian” also carries with it a cynicism and hatred about a stultifying Edwardian class structure into which he was born. At Eton he ‘had to supress his distrust and dislike of the poor, his revulsion from the ‘coloured’ masses who teemed throughout the empire, his suspicion of Jews, his awkwardness with women and his anti-intellectualism’[12]. But he could not abide the establishment that underpinned such attitudes, rebelling and then abandoning his class. Orwellian” as the ultimate “outsider” was a precursor to the “Angry Young Men” of the 1950s and 60s, and possibly to the punks of the 1980s.

“Orwellian” is not static, its meaning and inferences changing, and no more so than since the collapse of Communism. Where once it conjured up a futuristic “Orwellian” nightmare, now it is used to describe dystopic times gone by.  The term’s first use, by Mary McCarthy’s 1950 ‘On the Contrary’, was in the context of ‘the Orwellian future’[13]. After 1992, it has been used, much like “Nazism” or “Stalinism”, to recall foregone perils. Ironically, Orwell himself, through the “Orwellian” prism, has become synonymous with the totalitarian regimes he once satirised.

Given its indefinable meaning, “Orwellian” has curiously always said more about its user than about itself. For example, Hitchens used it to justify his support for the Iraq war, ironically evoking Orwell who was famous for exposing the horrors of war. Another irony was the evocation of Orwell in the final edition of the News of the World, brought to a demise by the “Big Brother is listening” phone-hacking scandal. It quotes Orwell on the final page: ‘The wife is already asleep in the armchair and the children have been sent out for a nice long walk. You put your feet up on the sofa, settle your spectacles on your nose and open the News of the World’[14]. Here, as the Telegraph points out, the editor cut the end of the quotation, which read ‘In these blissful circumstances, what is it that you want to read about? Naturally, about a murder’. [15]

We have hijacked Orwell’s name to lend legitimacy to our own, often controversial, views. But I don’t think Orwell would have been much surprised. For him, language is merely ‘an instrument, which we shape for our own purposes’[16] and the abuse of Orwell, for financial profit, political point scoring, or waging war, is the greatest ‘Orwellian” crime of all. I rest my case here:

The Road to Nineteen Eighty-Four

George Orwell, Down and Out in Paris and London (London, Penguin, 2001)

[14] Michael Deacon, George Orwell would be proud of how his words were twisted, Accessed at: http://www.telegraph.co.uk/news/uknews/phone-hacking/8630799/George-Orwell-would-be-proud-of-how-his-words-were-twisted.html, (11, 8, 2011).