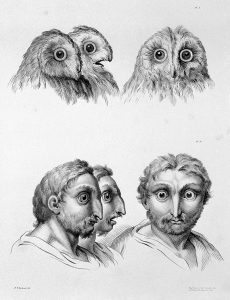 Caricature, both verbal and visual, builds on the insights of physiognomy; it resonates with the innate physiognomic intelligence lodged in the human mind. By taking seriously and emphasising the psychological reliability of face reading, caricature triggers the activation of a satirical knowledge; it claims the paradoxical seriousness of an archaeological wisdom according to which the authentic nature of a person can be divined by analysing his/her body and face, suitably deformed to stress the salient traits.

The idea of caricature being related to a form of regressive knowledge explains its sometimes violent harshness, and the often unpleasant incorrectness of satire, such as in the previously analysed case of Gadda’s anti-fascist verbal caricatures. Gadda detects in Mussolini’s physiognomy his bestial and violent nature; he describes the body of the Italian fascist society as deformed by an erotic excitement targeting the body of the Chief. Particularly, women’s behaviour, triggered by desire, according to Gadda contributed to the defeat of reason, legitimated the violence entailed in the triumph of Eros, and enabled the reproduction of fascism. Caricaturising the bodies of men and women misshapen by sexual desire, Gadda aims at unveiling the psychological and emotional causes of fascism.

Gadda’s enraged misogyny makes evident that he is reactivating what I called a regressive knowledge. Gadda’s premises are “scientific”; he designs a Freudian, psychoanalytical analysis, based on supposedly rational observations. Still, to give evidence to his account Gadda needs to draw upon the physiognomic-emotional insights which can vividly represent his thesis; to the instinctual, irrational interpretation entailed in the violence of caricature. His satire registers the emotional heating of an entire society, and his response is as much emotional as the enticement of the public sphere it intends to fight back.

In Goffredo Parise’s Il prete bello, published in 1954 but set at the end of the Thirties, with fascism at its peak, the devoted fascist and good-looking priest don Gaetano perturbs the life of an entire town and triggers a compelling attraction in both men and women. In this case, the social body is already deformed by poverty, hunger, small-mindedness: from the very beginning of the novel, each description is a caricature. Though, the erotic flow produced by the arrival of don Gaetano stresses and emphasises this “original” deformation. Desire and eagerness of pleasing the priest deform grotesquely the behaviour of the inhabitants, whose perversion is impressed in their bodies and faces, disfigured by an ugliness which seems to be the consequence of don Gaetano’s beauty, that is to say, of fascist ideas. 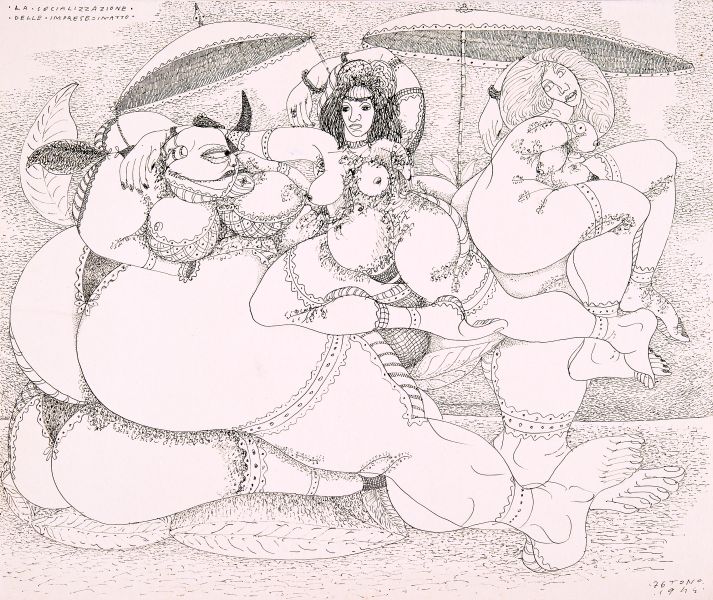 Eros produces caricatures, it makes visible the emotional deformation of the body, such as in this portrait in motion of Miss Immacolata, that renders her hyperbolic reactions to the news that her beloved don Gaetano doesn’t have an affair with another woman:

The same link between private sexual lives and public excitement is represented by Vitaliano Brancati in his Il bell’Antonio, published in 1949. The beautiful Antonio Magnano, a Sicilian man, triggers the desire of all the women and seems to embody the prototype of the fascist (and Sicilian) lover. 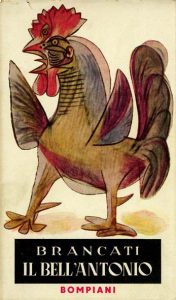 Antonio, though, hides a secret: he is sexually impotent. In the context of fascism, Antonio’s apparently shameful impotence becomes an unconscious, unwilling rejection of the obsessive masculinity officially performed by the regime. Because of Antonio’s misfortune, he and his family can progressively detach themselves from the fascist community. But not without troubles: don Alfio, Antonio’s father, is intimately tortured by Antonio’s condition, struggling between social pressures and the defense of his son’s honour. Alfio’s masculinity is led to a stress point by Antonio’s impotence. And his body, constantly overexcited by anger, becomes the battlefield in which the tension between conformism and rebellion is made comically, hyperbolically visible. As in this dialogue with the brother-in-law Ermenegildo, who is similarly transfigured by rage and concern:

More subtle and implicit, but not less significant, is the connection between sexualisation of society and deformation in the work of Tommaso Landolfi. Landolfi frequently uses images of animals as a stress-test for humanness. The ever impending monstrosity that circulates in Landolfi’s works is telling about the deep emotional distress that jeopardises both social and sexual life of his characters.

In La pietra lunare, Giovancarlo’s fear for sex hints at a dysfunctional relational life. Giovancarlo dislikes the bodies of every woman in his village. The deformed, unpleasant bodies of the town dwellers represent the vulgarity of the social body. When Giovancarlo is looking at his fellow humans from his window, his gaze produces a collective caricature:

As Giovancarlo meets Gurù, the woman-goat, the capra mannara, the encounter seems to disclose for him the dimension of true sexuality and a different femininity, represented by her radically diverse body. Interestingly, Landolfi overturns the hierarchies of deformation: what is grotesque in this tale is the human body deformed by conformism, while the body of the woman-goat embodies the option of escaping from the absurdity and paralysis of reality.