Following the footsteps of the rebels in the Peasants Revolt allow us to observe the unique characteristics of London and gather information needed to relate to the rebels through means of visuals and sensations. We began our journey by crossing the London Bridge. The dominating landscape of the city ahead was hard to ignore and relating it to the views of the rebels crossing the bridge initially seemed relatively easy until we faced problems and differences with modern London. In actuality, the London Bridge would have been the only bridge across the Thames into London, meaning that the already crowded bridge we encountered, would have been much more crowded and noisy as well as supporting stacked-up shops. 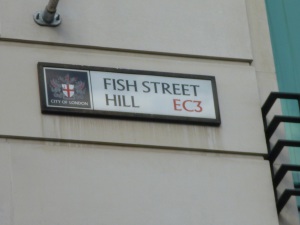 Throughout our journey we ran into various street names such as Whitefriars Street, Lombard Street and Fish Street Hill, which derived their names from the congregations created in medieval London. This not only allows us to imagine what a street of fishmongers might have looked like but also gives us information as to where certain markets, temples or shops would have been located. Additionally, it tells us that, contrary to buildings, the location of roads primarily remained the same.

Next we stopped by a WH Smith in Cannon Street, to uncover that inside it was one of past London’s biggest treasures. The real story behind the London Stone is not fully agreed upon, but it is a fact that for centuries it was placed at a central position in the city, in Candlewick Street, being a local landmark. If it was used primarily as a reference for measures or as a religious site, we cannot say with certainty. 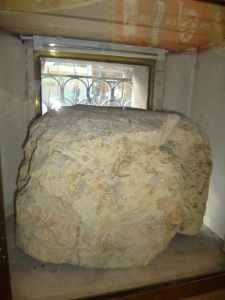 Just around the corner was Walbrook Street, a street that would have been a flowing brook in medieval London. Up the road we encountered St. Stephen Walbrook, a 15th century church that was rebuilt after the Great Fire of London and now is designed, like many of the building we came across, in the style of Christopher Wren. Interestingly, the initial site of the church was located on the west of the brook and is now situated on the east. This not only highlights the differences between medieval and modern London but also highlights the similarities in our attempts to preserve history. 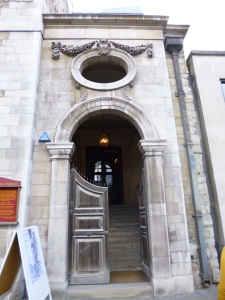 In the grounds of Saint Paul’s Cathedral we passed by Saint Paul’s Cross. In the absence of mass media, this pulpit was where most news was announced and public comments were made. In 14th century London, this was where public opinions were fomented 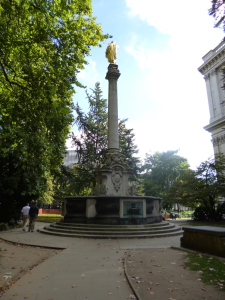 We then moved on to the Pater Noster, which was the centre of London’s publishing trade. The first Bible written in English language was transcribed there and the street used to be filled with markets selling scribe-related items.

Lastly, we marched down the Strand to the opulent Savoy Hotel, the place where the original Savoy Mansion used to be. It was the house of the Duke of Lancaster that was completely destroyed by the peasants during the Peasants Revolt in 1381, making it the perfect ending to our tour and leaving us thinking, do the spirit of the city and its places really ever change? 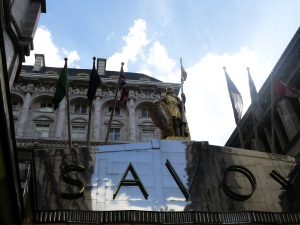