The Museum of London

We visited the Museum of London and saw many fascinating and precious objects from medieval London, such as part of the Eleanor Crosses. The museum is located on the London Wall, close to the Barbican Centre and is a part of the Barbican complex, a collection of buildings created in the 1960s and 1970s as a way of re-developing the bomb damaged area of the City of London. It overlooks the remains of the Roman city wall on the edge of the oldest part of London, now its financial district, and is jointly controlled and funded by the City of London Corporation and the Greater London Authority. The Museum of London is primarily concerned with the social history of London and its inhabitants throughout time and documents this from prehistoric to modern times in several galleries (e.g. London before London (London 450,000 BC to AD 50), Roman London (AD 50-410), Medieval London (410 to 1558), War, Plague and Fire (1550s-1660s) Expanding City: 1666-1850s, People’s City: 1850s-1940s, World City: 1950-today, The City Gallery, The London 2012 Cauldron: (designing a moment).

The museum can be seen as reminiscent of London as a city of layers because it is a result of the continued rebuilding of London. Moreover with regards to archaeological digs, the museum can only dig at sites which are being developed, e.g. in the City of London, Crossrail. This makes the areas in which it carries out activities somewhat random in nature, however this has not dented the work of the museum.  Artefacts that are discovered are therefore not always from places which were significant to Londoners, however with this being said, the museum has managed to unearth invaluable information and objects from London’s past. 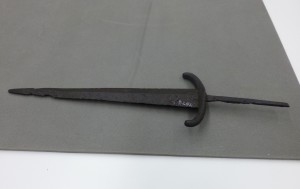 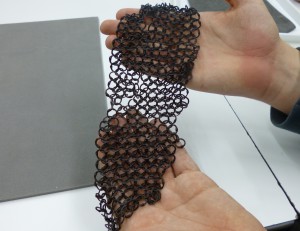 The Museum of London has around 12,000 items dating from the medieval period, and we were fortunate enough to be able hold some of these objects on our trip. The medieval collection is most well-known for containing a large quantity of arms and armour, however this is not necessarily armour of the highest quality, but mostly everyday civilian weapons such as the dagger and chainmail that we were able to hold. Throughout the last thirty years, the museum has acquired additions of small pieces of metalwork from the Thames ‘mudlarks’, another name for its metal detectorists. Some of these discovered artefacts, including brooches and belt fittings help to paint the image of a dweller of medieval London. Another artefact we were able to hold included a floor tile, part of the collection of ceramics and floor tiles, and the majority of these came from Buckinghamshire from around the 1330’s to the 1380’s.

Other famous collections from the Museum of London include the dress and textiles   collection, and the Tudor and Stuart Collection. The dress and textiles collection boasts over 24,000 objects, dating from the Tudor era to the modern day, as well as a Henry Matthews Collection of clothing prints dating from the sixteenth century. The Tudor and Stuart Collection contains objects from the sixteenth and seventeenth centuries, and holds over 1500 pieces of cutlery, as well as a collection of edged weaponry manufactured by the Hounslow Sword Factory. There are also dresses, accessories and toys, as well as watches and ceramics that are on display in this collection. 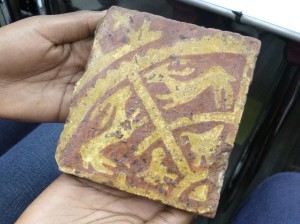 There are a variety of collections available at the Museum of London, but nothing compares with being able to hold medieval artifacts and looking back at their history!

The final excursion of the year took us outside of London’s walls and into the city proper, where we considered how London both expelled and embraced the people, professions and communities situated on the south bank of the Thames, and in particular studied the relationship between the Church and the more debauched citizens who made their residences there.

During our study of Medieval and early modern London Southwark has always been the area in which professions frowned upon were banished to in order to not sully the morality of the men and women who lived within the city walls. Being situated just opposite the city made it an ideal place to found businesses that were all considered taboo: tanner’s shops, brothels, taverns and at a later date, playhouses. We focused our study on a few of these and considered how they affected the city itself. Taverns in terms of prestige were an establishment that was often middling on the social scale, enabling them to cater for the well-off or rich merchants of London. They were vital places for common people to meet, and were often very effective ways to disseminate information to a predominantly illiterate society.  They were also ways in which the common people could spread ideas, which often worried the elite and upper classes who were unused to the beginnings of self-awareness shown in cases such as the Great Revolt of 1381.

Taverns and brothels were often very similar establishments and the two weren’t entirely separate; they often doubled as both in order to attract a wider variety of clientele. As

prostitution wasn’t allowed in the City of London itself Southwark became the next best area to establish the business. In general the profession was frowned upon but was largely considered a necessary vice in order to prevent sins considered worse from happening – such as sodomy. This gave the men of London access to prostitutes they would otherwise have been unable to procure, and they often traveled across the Thames to frequent the brothels.

Interestingly, despite being so thoroughly damned by the Catholic Church many of the brothels in Southwark were owned by the Bishop of Winchester.

Though prostitutes were effectively ostracized from the community by the church it was interesting to see how the ecclesiastical world collided with the material, baronial world as religious leaders who held lands would often grow rich from collecting rent from the very establishments they condemned. A final, very interesting item of study were the playhouses established in Southwark, particularly the Globe theater. Opened in 1599 it saw the meteoric rise in popularity that theater gained and profited from it, despite the initial suspicion that the clergy and the nobility had for plays that could potentially form a social critique on the society in which they ruled. The success of playhouses, though partly due to the patronage of monarchs like Elizabeth I and James I, were the small amount needed to pay to witness a play. This meant that all strata of society rubbed shoulders and could comment on the questions that the play raised. As one of the few areas where the common man could interact with the upper classes playhouses were novel areas where the traditional boundaries in Medieval society were blurred.