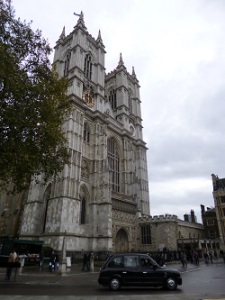 This week, we explored the unique connection between the crown and the church and their linked and individual power in our visit to Westminster Abbey and the National Portrait Gallery, a relationship that still exists today. 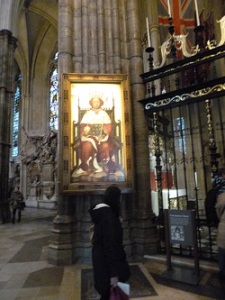 The first thing we looked, perfectly exemplifying this relationship, was the coronation chair. This iconic seat, housed in the Abbey where coronations have taken place since 1066 with the coronation of William the Conqueror, has been used in coronations for centuries.

Walking around Westminster Abbey, we learned how the placement of one’s grave was significant to their social status, even in death. Therefore, Edward the Confessor’s shrine which is the only shrine remaining in England, which we managed to admire during the 11 o’clock prayer, is in the premium spot before the altar, surrounded by his successors, such as Henry III who championed him.

Dr Poleg even got to sit on the special chair of the prayer leader in front of the shrine! 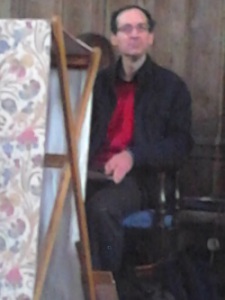 We also admired the Lady’s Chapel which houses the burial sites for several dead monarchs, including the sister Queens, Mary I and Elizabeth I, who are buried together. 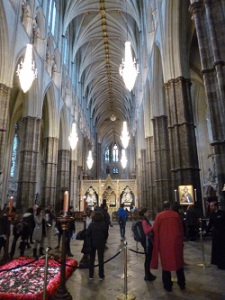 Like our last excursion, architecture played a large part in the learning experience and we discussed the Gothic style in which the Abbey was constructed. We also talked about the unique roof supports and how the weight was distributed mostly outside of the Abbey. The pillars  inside are more decorative to fit with the Gothic style, intended to draw your eye to the high ceiling and give the impression of a large and open space. 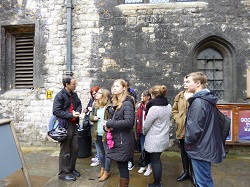 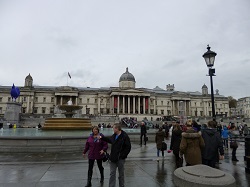 The Tudor room of the National Portrait Gallery, on the very top floor of the building, is a room full of the rich imagery of royal propaganda and the cult of power cultivated by rulers in both the medieval and early modern period.

The imagery found in the coronation portrait of Elizabeth I, mirroring that of Richard II in Westminster Abbey, presents her as the perpetually-youthful ruler invested with all the accoutrements of royal power. 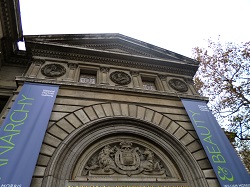 The Holbein portrait of Henry VIII presents the image of a virile, wise and imposing king and the portrait of Edward VI conveys a figure almost identical to that of his father, even down to a larger stomach added in the editing of the image. Portraits of Mary I show a harsh, authoritarian ruler, staring down at the viewer.

Such images are congruent with the images rulers have presented of themselves since the early Medieval period. The portraiture of monarchs are essential in understanding their reigns as they project the idealised image of the ruler, how they wished to be presented. Images of wealth, power and knowledge are translated onto these canvases.

One of the most stunning examples of this manipulation of imagery is in the portraits of Elizabeth I. In all her images she is the ever-youthful, beautiful ruler, not out of vanity but to present her enduring power, capability and skill as a ruler. Her youthful visage represents her enduring image throughout history. 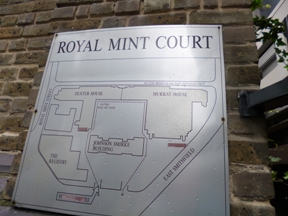 about the Death and its impact on London. The first stop on our tour was the Royal Mint. Unfortunately, the site was closed to us last minute as there has always been a difficult relationship between the present day mint and the archaeological site beneath. Beneath the Royal Mint is the site of St. Mary Graces a Cistercian abbey built in 1350. After the arrival of plague in London in 1348 the cemetery was expanded to cater for the extra dead. In 1980s the Royal mint was rebuilt and excavated, revealing three mass trenches with 762 graves and 213 coffins. Much of the writing and documentary evidence about the Black Death suggests there was a complete breakdown of society. However, the neat graves of the plague pits and St. Mary Graces suggest a high level of planning and order. 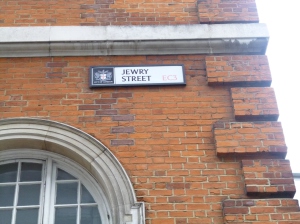 Next, we passed through Jewry Street and briefly stopped off at the Holy Trinity Priory. The name Jewry Street reflects the medieval reality. We know Jews lived here because excavations have exposed artefacts used in Jewish rituals. However, since the expulsion of the Jews in 1290 no Jews have lived here for 700 years. Streets like this show us how little the layout and street names change in London.

Holy trinity priory was one of the most influential monasteries in London. Established by 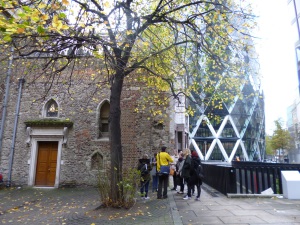 Queen Matilda around 1108. As a result of the Black Death there was a decline in donations and like many of the other monasteries in London the Holy trinity Priory went bankrupt in 1532 before the Dissolution of the monasteries in 1536. A part of the building still survives today and this shows us that the only medieval buildings that survive today are those whose owners have considerable wealth and power: buildings connected either to the monarchy, guilds or the church.

Our last stop was Guildhall, with our particular interest being the archives kept there. A lot 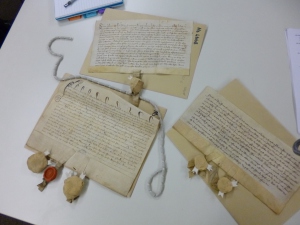 of the evidence we have for the Black Death comes from original documents, such as those kept at the Guildhall archives. These documents gave us information beyond that of the text itself. Though, at best, we had rudimentary Latin and the script was difficult to read we were still able to appreciate the document itself due to the condition the manuscripts had been kept in. Many still had their original attachments such as seals which were used to authenticate documents. The first document we examined closely was a deed for the exchange of property between recently widowed mother and daughter during the Black Death. It showed that there were changes in society that necessitated the need to take more care of each other but it also demonstrates that there was not a breakdown in society. Like the trenches of the plague pits, the documents reflect that things are not being done randomly but with planning and in an orderly fashion. The document is part of a series of manuscripts for the same family both during and after the advent of the plague. The seals attached to the documents belong to the company of Weavers and therefore reflects the responsibility of guilds to look after their own. 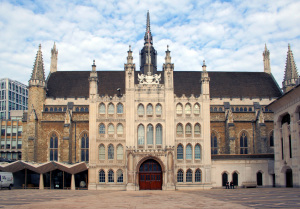 the Blitz, making it is the only secular stone structure dating from before 1666 left still standing in the City. The word ‘guildhall’ is said to derive from the Anglo-Saxon ‘gild’ meaning payment, so it was probably where citizens paid their taxes but it was also where the ruling merchant class held court, fine-tuned the laws and trading regulations that helped create London’s wealth. During the Tudor period it was the setting for famous trials, including those of Anne Askew, Sir Nicholas Throckmorton, Lady Jane Grey, and Thomas Cranmer. The main role of the guilds was to protect the quality and reputation of a trade and the members of a company, but they also played a role in parish business and religious observance. The power, both economic and political, wielded by the medieval guilds was immense. By the early 14th century, no-one could practice a trade, set up shop, take apprentices or vote unless they were admitted to a livery company.