After our visit to the London museum, we took a short walk over the bridge to look at small section of the London Wall that is still standing today, which lay at the junction of Aldersgate Street. Here we gathered alongside the barriers, often having to huddle together to allow city workers past, and discussed the history and purpose of the wall.

The wall was built in around 200AD by the Romans and slowly developed in size and structure over the centuries. What was interesting though is that there is no clear reason or agenda for the construction of the wall. Many believe that the construction of the wall was an attempt to protect the city against invasion in the 180’s, while other believe it was erected as a result of a power struggle between two hungry leaders, Septimius Severus and Clodius Albinus. The London Wall was one of the largest construction projects carried out in Roman Britain. The wall was constructed largely from Kentish ragstone brought by water from Maidstone. It has been calculated that some 1,300 barge journeys would have been required to transport the 85,000 tons of stone from Kent. In the late third century, Londinium was raided on several occasions by Saxon pirates. This led, from around 280 onwards, to the construction of an additional riverside wall. In later years the wall was redeveloped in the medieval period with the addition of crenulations (small dips in the wall, which can be seen in the picture on the right) more gates and further bastions.

There are pieces of the London Wall scattered around London today, although many parts were destroyed by the Blitz and by demolition of part of the wall in the 18th and 19th centuries. Today fragments of the wall are buried under shops and warehouses. The only remaining standing segments of the wall can be seen in the grounds of the Museum of London, in the Barbican Estate and around Tower Hill

The particular section of the wall we visited on the trip was part of the remains near the Museum of London, which can be seen on the right. Although this section is not in the best 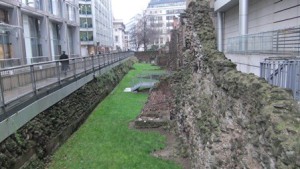 of conditions, it was still possible to see how the wall had changed over time. We could see the addition of the medieval crenulations and the small openings, almost like windows in the wall.

Overall, the group really enjoyed the trip especially combined with the visit the London museum earlier on in the day. It gave us all the opportunity to understand how the people who lived within the walls of London on their day to day lives and allowed us to see some of the objects they may have come into contact with.