It is the victors who write history, and with that being said, there is not too much to be learnt about the experiences and struggles of the peasants during their revolt of 1381. One of the advantages of walking in the footsteps of these people, is that still just over 600 years later we are able to piece together a sense of what the city would have looked like, and felt like from their perspective. Perhaps the best example of this is crossing London Bridge which was the only bridge allowing people to get to the other side of the Thames. One can not only imagine the narrow and cramped nature of the crossing, but also the feeling of awe which would have met a crowd of country-men for which this would possibly be their first and last trip to the capital.

Obviously, trying to imagine a medieval city in modern-day London has its difficulties; a series of reformations, a great fire, a blitz, and not to mention the introduction of several new office-buildings, all serve to make such a task a real challenge. Having said that, one of the best ways to appreciate medieval London and what would have been there, is by looking at those things which do not change quite so quickly over the centuries – street names. London, like today, was a city centred on work. We can see for instance, street names such as Bread Street where bakers worked, Milk Street where cows were kept, Threadneedle Street which was where tailors would carry out their work, Bucklesbury which was possibly home to bucklers, and Cloth Fair where merchants would buy and sell their cloth at the market by St Bartholomew Church. We can tell that this latter street for example, would have been one of the wealthiest in London. Though the many monasteries of London are now non-existent, the street names still hold their legacy; hence we have the road names Greyfriars, Blackfriars, and Whitefriars. 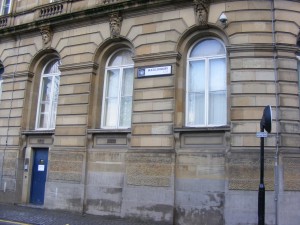 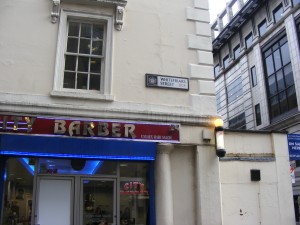 The Tower of London and Westminster Abbey are the only buildings from the Middle Ages which have survived the test of time; this was because they were owned by the monarchy, and were therefore not pulled down in order to make money. However, there is still a lot to be learnt from looking at the remains of other buildings, or even reconstructions of old buildings. Temple Church, which dates from the end of the twelfth century provides a useful idea of what the churches of the era would have looked like. This being said, the round style of the church (which is based on those in the Holy Land) is much less typical of English churches, and bears more resemblance to those found far more frequently in Europe.

Though slightly off the route of the Peasants’ Revolt, again by looking at Staple Inn in High Holborn, it is possible to imagine the medieval street. This survived the Great Fire but was unfortunately damaged in the blitz. Nonetheless it offers a fine example.

London therefore is a source in itself. The Peasants’ Revolt can be traced and imagined; from picturing their determination to attack the lawyers at Temple, to their excitement at destroying the Savoy.